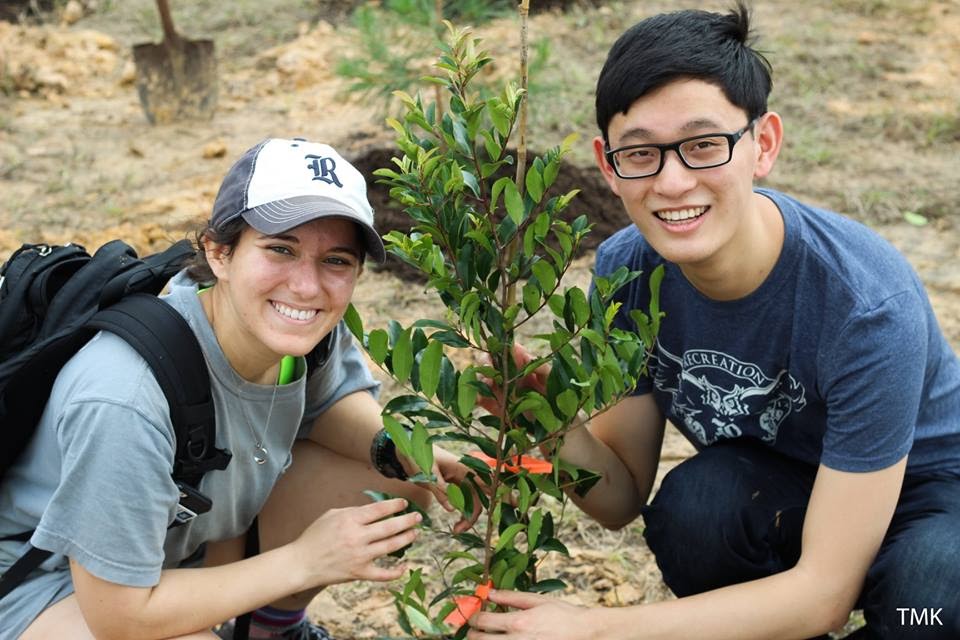 Sarah Silberman is a second year undergraduate majoring in French and History. She serves as the EcoRep for Wiess College, and will become the co-leader of the program next academic year. We met with Sarah to discuss environmental issues from the perspective of a humanist, our inability to see the stars, her plans for the EcoRep program, and much more.

How did you first become interested in environmental issues? Did particular people or places shape this?

Sarah Silberman: For as long as I can remember, I have been at least somewhat interested in environmental issues. My mother was always very involved in activism, and she instilled this spirit in myself and my brothers since childhood. When we lived in Ellicott City, Maryland, too, we lived in the middle of a forest, and my brothers and I would spend hours upon hours exploring the outdoors. Even when we moved to Texas we continued to do very outdoorsy things. So, I would say I’ve always been interested in the environment and interested in activism, but it was really my older brother, Aaron, who is a student at Georgetown University, who catalyzed it into being an active environmental activism. With him, I had many discussions about what it meant to be environmentally conscious in general and as a college student, and it was really seeing what he did that inspired me to start thinking about the environment as a problem to tackle and not just something to sit back and enjoy.

You had the opportunity to study abroad as a high school student. What influence did this experience have on you and how you see the world?

SS: I was fortunate enough my sophomore year in high school to participate in an exchange student program that took me to Osaka, Japan for twelve months. I was there to learn the language and the culture, and I dove in head first. As much as I love Japanese society, there were certainly flaws that became apparent. The number one flaw for me was the casual sexism that I experienced there. Though I experienced it in the United States as well, I had gotten used to the type of sexism I went through, so living in a foreign country really made me reexamine sexism and issues related to feminism. It was really this time in Japan that got me thinking about issues related to sex and gender, as well as general feminist issues, and I have been able to carry this line of thinking forward with me into the present.

You recently organized a talk at Rice about light pollution by the well-known photographer and cinematographer Harun Mehmedinović. What led you to do this, and to your interest in “dark skies” initiatives?

SS: The first weekend back this semester, I attended a talk of Harun’s in Austin. There is where I first learned about dark sky issues. The talk, which was organized by my mother, involved a presentation and a star-gazing session after, and it was really after the talk that it dawned on me the importance of dark skies. Before the presentation, I honestly took dark skies for granted. The neighborhood I live in is an International Dark Sky Association designated neighborhood (which means that it passes a standard of a light-pollution free night sky), and I’ve made various trips out to West Texas, so whenever I looked up at night, I saw stars. When I came back to Houston and looked up at night, I didn’t see that. It was at that moment that I was inspired to bring Harun to Rice, because chances were very few people had thought about dark sky issues and realized their importance. Though light pollution is not the most pressing environmental issue, it’s something that most people can relate to and tangibly see the effects of. I would consider the talk a huge success, because I think that attendees truly learned about the problem and began to care about it. I am hoping to bring Harun back in September or October to engage more with classes and possibly do another presentation.

Where do you like to go to see the Milky Way and a truly dark sky?

SS: The scale to describe a night sky in relation to the number and quality of stars that you can see is called the Bortle Dark-Sky Scale. In this scale, 8/9 is the worst quality, what we experience at Rice, and 1 is the best. Places like Death Valley, California are scale one and would definitely be one of the best places to see a truly dark sky. However, as a Texan I have a personal affinity for Texas deserts, so I would say anywhere out West. Marfa is a classic, but pretty much any small West Texas town would be fantastic.

As a student with double majors in the Humanities, do you find that your training as a humanist equips you to approach environmental issues in a different way than what you observe from people with backgrounds in engineering or the natural sciences?

SS: As a double major in the School of Humanities, I think that I have a fairly unique view of environmentalism that may not be seen in an engineer or a natural sciences major. Because of the nature of my majors, I understand more about the history of environmental activism in the United States, as well as what it looks like abroad. I am also pushed to think critically about each and every issue, and examine them from every angle possible. This can mean proposing the solution, to asking the question, which I feel is a unique perspective in environmentalism.

Do you see a problem with how we even talk about the environment with each other?

SS: I think that with any activism, it can be easy to slip into the “I know more than you do, so sit down and start listening” mindset. This rarely gets people to respect you, let alone listen to anything you have to say. I honestly believe that approaching environmentalism and the spreading of environmentalism is the single best thing you could do. You care about these issues because of their effects on the environment and humanity, so why talk to anyone with anything less than compassion and genuine caring? It’ll make you a lot more respected, and it will actually get people to listen to the content of your speech rather than the tone.

As an EcoRep for Wiess College, you are in a position to talk about the environment a lot. How did you find yourself in that role, and what kinds of initiatives did you spearhead?

SS: Last year’s Wiess eco-rep was Meagan Dwyer, who became a close friend of mine over the course of the year. In her I found a like minded individual, with whom I could gush about the environment at anytime. She really inspired me to lean into my passion of environmentalism at Rice, and she is the complete reason for why I became eco-rep for the 2017-2018 school year. The projects I focused on this year were very education-based. This included raising awareness about use of #6 plastics, how to recycle properly, what it really means to turn off the lights and unplug, etc. Though these all seem like smaller projects, they end up having a huge effect because they teach people about the issue and how to solve it simply. I personally believe that the most effective way I can help the environment is by teaching those around me about the issues and why to care about them, so this became my grand project for this school year. Two things that I am particularly hopeful about are the two competition weeks we had at Wiess: Wiess Bat Week (Embrace the Shadows) and Wiess No Waste Week. Both of these projects involved self-teaching and culminated with big projects or events to cap off the week. The plan is to continue these competitions next year, hopefully making them into traditions, and expand environmental knowledge in Wiess!

In the fall, you’ll be co-leader of the EcoRep program. What are your plans?

SS: As an incoming co-head EcoRep, I have three main focuses. First, I want to see all colleges with equal, if not comparable, environmental features. Simple examples of this are reusable mugs in all serveries throughout the whole day and posters above all trash cans and recycling bins in colleges to show what goes where. Further, I want to empower eco-reps to pursue any project for whatever environmental issue is dear to their hearts. It can often be intimidating to start any big project, so I want to give all eco-reps the confidence in themselves and their abilities to make tangible change. Finally, I want to focus on campus-wide education. I genuinely believe the best way I can personally help the environment is by teaching those around me about environmental issues and how to change small daily habits to make a big difference. Over the next two years, I plan on focusing on these three pillars, with a particular focus on campus-wide education.

You describe yourself as a transitioning vegan. Tell us about your journey to veganism, as well as some of your favorite dishes and restaurants.

SS: So, I became a vegetarian about a decade ago, I want to say. When I first became one, it was because I wasn’t a fan of the taste or the texture of meat. Then as I grew older, it became more of a stance against the mass production of meat, which is both terrible for the animal and the environment. Veganism for me was just the continuation of this thought process. I could no longer justify to myself eating eggs and drinking milk and participating in a system that I knew was beneficial to no one but me. So, I removed myself from the system. Genuinely though, I have no issue with sustainably- and well-sourced animal products, but I myself do not want to partake in them. I am also super enthusiastic about personal health! I workout and do yoga on a regular basis, and I try to fill my body with all of the foods that make me feel my best, and a vegan diet does that for me. Honestly, I don’t think eating on campus as a vegan is too difficult; you just have to get kind of creative, which I like doing anyway. My two go-to meals recently have been a veggie plate with spiced-up servery hummus (with sriracha, garlic salt, etc) and sweet mashed potatoes (one full baked sweet potato, hummus, and green onions). My absolute favorite restaurant is called Bouldin Creek Cafe, and it’s an all vegetarian/vegan place in Austin, and it is amazing. Like with environmentalism, though, I don’t see my diet as making me superior to those who don’t eat vegan. Instead, I see it as a time to talk about why I eat the way I do and teach those who ask about the personal and environmental benefits of cutting out animal products.

Finally, what do you hope to do after you graduate?

SS: Ironically, right now I don’t plan on going into anything environmental as a career. My plan is to graduate in May 2020 and take a gap year to teach English in Japan. I miss Japan like crazy, and I honestly cannot wait to go back for a long period of time. After that, I plan on going to law school, in hopes of becoming a criminal attorney. Like with my passion for the environment, I am very passionate about law and the legal system, with a specific focus on the criminal justice system. To be frank, I think where the system is right now is definitely not where it ought to be. As an attorney, I hope to keep my values and beliefs at the forefront of my mind, and I participate in changing the system on an everyday basis as a working lawyer.