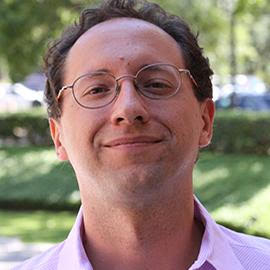 Dominic Boyer is Professor of Anthropology and Director of the Center for Energy and Environmental Research in the Human Sciences (CENHS) at Rice University. We met with Dr. Boyer to discuss CENHS, podcasting, Iceland, Rice environmental curricula, and much more.

How did you first become interested in environmental issues? Was there a specific event, moment, book, or person that shaped your interest?

Dominic Boyer: In a way I backed into my interest in environmental issues through my research on the political culture and conflicts surrounding wind power in Southern Mexico. That project began in earnest around 2008. Up until that point, I would say that while I was aware of climate change, for example, it was more in my peripheral vision. And, in retrospect, I realize I wasn't as informed about the relevant science as I should have been, let alone the broader environmental and social implications of what climate change will bring. I don’t think it was a specific moment, more like a growing awareness as I investigated the energy/environment nexus in my research and gained a better appreciation of the challenges of energy transition, as well as of the urgency of climate action.

What unique perspectives and insights does your training as an anthropologist bring to your understanding of current energy and environmental challenges?

DB: Anthropology is at its core a field science rather than a lab science, and it is a field science that seeks to understand how other people understand their lives and worlds. That means that our scientific practice is wholly dependent on trying to create respectful, mutually beneficial relationships with people who live lives other than those we live here in the elite research universities of the global North. Because of the diversity of contexts we work in, anthropology tends to produce research that challenges the universal truth claims and habits of knowing the world that are also a part of the culture of the global North. I think that that bigger picture is really important to keep in mind as we engage today’s environmental challenges. We have to understand that there are diverse ways of being human and diverse ways of living a good life, and not all of them are as carbon- and consumption-intensive as in the U.S. We also have to understand that — terrible as an event like Hurricane Harvey was — the worst effects of climate change are not going to be felt in places like Houston. Anthropologists are often working in those places and should be able to help communicate local concerns and hopes to broader audiences.

You founded the Center for Energy and Environmental Research in the Human Sciences (CENHS) as the first research center in the world devoted specifically to research on the energy/environment nexus across the arts, humanities, and social sciences. Why did you create it? What outcomes did you seek?

DB: The first thing to say is it was a “we” who founded CENHS. In response to Provost George McLendon’s call for engagement around energy and environment issues, Caroline Levander convened a group of humanists and social scientists to think through how we could avoid being sidelined from that initiative. Ironically enough, we actually ended up being leaders by forming the Cultures of Energy working group with some timely assistance from the Mellon Foundation and that in turn led to the proposal to found CENHS in 2013. The basic idea for the center is that if we want to develop impactful responses to our present energy and environmental challenges, we are going to need the help and expertise of artists, humanists and humanistic social scientists. This is not to impugn, in any way, the expertise of scientists, engineers and policy specialists; their work is vital too. It is just to say that the impasse we face surrounding, let’s say, energy transition, is not principally a technological or policy impasse. We already know what works more or less. The impasse is political, social and above all cultural. Beyond just the pressure applied by certain special interests to slow-walk change, we have trouble imagining a bright future and good life that is not heavily reliant on fossil fuels and the high energy lifestyle they enable. To paraphrase Freud, our ideas of the future are built out of reservoirs of memory. And since we have no memories of a post-carbon future to work with, it hampers our ability to imagine and attain an alternative future. But that’s where, for example, the arts can be very helpful. Whether in literature or in film or in games, the arts can provide memories of alternative futures and help to expand our sense of what's possible. That’s why we wanted to create an incubator like CENHS.

How has CENHS been received by the research community? Has the impact met your expectations?

DB: As judged by the feedback that has come my way, I think the reception has been excellent. The podcast has listeners in virtually every country in the world now, for example. With the help of our excellent predoctoral fellows, the readership of the blog is climbing quickly as well. CENHS remains the only research center in the world specifically committed to bringing the arts, humanities and social sciences into the debates over our energy and environmental futures. But there are plenty of individuals, projects and networks across the world that are working on our wavelength. The whole purpose of CENHS has been to create a beacon for that ecology of art, scholarship and activism with the hope of making it into more of a community of dialogue. To be able to set up that beacon in a place like Houston is a delicious irony in my opinion. It’s like saying, “Don't give up; even here in the heart of American petroleum culture, we are making progress.”

We’ve just experienced in Houston an unprecedented rainfall event: Hurricane Harvey. One might argue that Harvey as a weather event was intensified by a changing climate, and that its impacts on Houston were exacerbated by years of poor land use decisions and a disregard for the environment at the local level. How has the devastation of Harvey influenced your thinking about future initiatives for CENHS, or more broadly for Rice?

DB: Harvey, the third so-called “500 year flood” event in the past three years I might add, definitely underscored our conviction that CENHS’s future needs to be more strongly focused on supporting local climate action and resilience movements. We’ve spent much of our first five years’ of existence working to develop our scholarly reputation on campus and abroad, completing important teaching projects like founding the ENST minor and helping with the reboot of the ENVS major. But my hope is that in the next five years we’ll be doing more work in the Houston community to promote climate awareness and activity. There are a lot of plans in the works right now but two that I can mention already are a partnership with Harris County Commissioner Rodney Ellis’s office to develop the Precinct One Climate Adaptation Plan (POCAP) and a plan to develop an Energy Futures Forum on campus to create a rallying point for local entrepreneurs and experts working on green energy initiatives.

You and your partner Dr. Cymene Howe are the most prolific podcasters at Rice. Your Cultures of Energy podcast has about 100 episodes to date. Why do you do it, and what sort of meta-lessons or insights have you gained from this work?

DB: Podcasting has been a terrific renaissance for radio after the dark days of corporate broadcasting consolidation in the 1990s and 2000s. Even with the surge in podcasts in recent years, there still aren't very many podcasts that seek to bridge academic work to wider audiences, so we thought it would be an interesting experiment to try in the context of CENHS given our mission. We passed 100,000 downloads about a month ago, so while we’re not unseating Marc Maron any time soon, we’ve been really pleased with the uptake of the podcast and surprised, as noted above, by how many listeners there are outside the U.S. I think it would be great to see more scholars and artists get into podcasting as a way of broadening our voices. It would be especially great to see more podcasts focused on climate change and other environmental issues.

We understand that you and Dr. Howe are planning to launch another podcast. Can you tell us about it? How will it differ from Cultures of Energy?

DB: The new podcast will be something completely different, pursuing one of our hobbies. It’s basically going to be a diner’s guide to Houston and will be called, wait for it, “We Ate Houston.”

Over the last several years, you’ve developed a rich set of research connections in Iceland, and you hosted the former mayor of Reykjavik Jón Gnarr as a visiting scholar at Rice. Why Iceland? What insights have you gained from your work in Iceland? Do you plan to broaden your engagement in the Arctic?

DB: Why Iceland is a bit of a long story, but the short of it is that I was doing a project on satire and political sincerity about ten years ago when someone brought Jón and his collaborators, project The Best Party to my attention. It’s the incredible story of a group of artists and normal people creating a political movement to challenge the stasis and corruption of Icelandic political culture, especially surrounding their banking collapse and debt crisis, but doing it in a fun and humorous way, to bring people back into politics again and show the world that normal people can and should run for elected office. People say that politics is the art of the possible and what Jón and The Best Party taught us is that you can change what’s possible. That’s a lesson that has come home in a very visceral way in the United States over the past year. It’s been terrific to see more normal people trying to get into politics as a result. In terms of future work in Iceland, Cymene and I shot a documentary film in Iceland last summer about the first well-known Icelandic glacier to fall victim to climate change. The glacier was called Ok and the film will be called “Not Ok.”

You’ve played a key role in the expansion of both environmental curricula and environmental research at Rice. Looking ahead, in what ways do you think these areas should further develop at Rice? What opportunities do you see for Rice making a distinctive impact in this space?

DB: I really hope Rice will continue to develop its environmental curricula. I think the interest and commitment is there on the part of faculty. We just need more students to get involved to show the administration that demand is growing.

Finally, we would welcome your recommendations of writers, filmmakers, musicians, or any other artists that you feel are doing an extraordinary job through their work of raising important questions or broadening our understanding of environmental topics.

DB: Whenever possible, we try to make our recommendations public by inviting folks whose work we admire to talk with us on the podcast. But, we can’t cover everyone because the arts community has done such a terrific job of rising to the occasion of climate change. CENHS has sponsored projects with multimedia artist Marina Zurkow and photographer Judy Natal in the past and we’re working with composer Matthew Burtner and his EcoSono group at the moment, as well as planning a project with the Egyptian muralist Ganzeer. We’re also really looking forward to the movie version of friend-of-the-pod Jeff VanderMeer’s brilliant book, Annihilation. Area X is a terrific analogue for the Anthropocene.