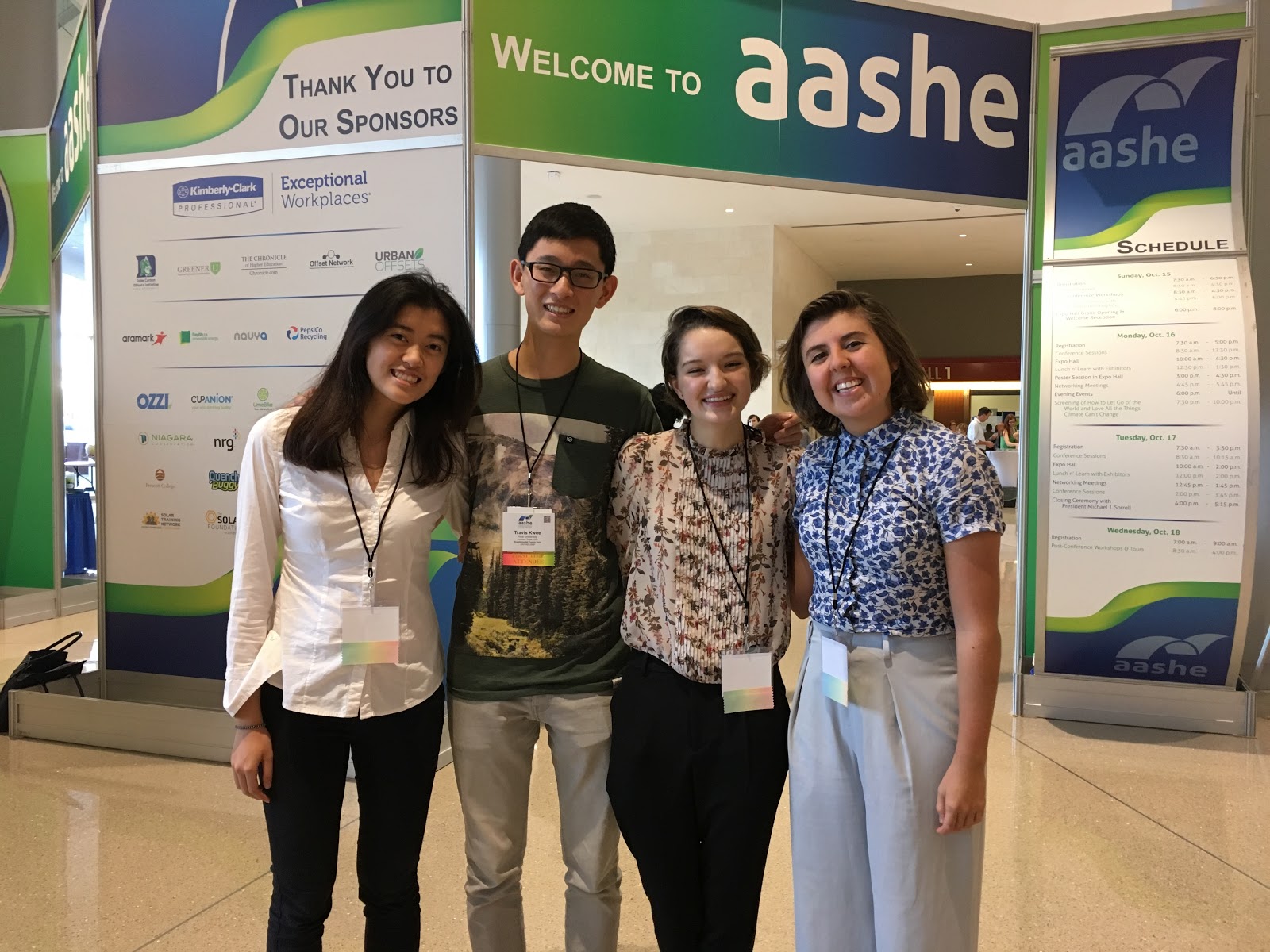 The AASHE 2018 Conference in San Antonio gave students an opportunity to discuss and learn about actions that could be taken to advance sustainability. The Sustainability Office here at Rice sponsored the registration for four students — Travis Kwee, Kiara Reyes, Grace Wickerson, and Kathy Yu.

Travis Kwee attended sessions on measuring campus impact, challenging the linear consumption economy, how to talk about climate change to wide audiences, and greening athletics. The senior from Baker College was able to learn a lot about having difficult conversations with people on topics such as the existence of human-caused climate change, what methods are most effective for approaching traditionally apathetic populations, and new methods for enticing busy students to care about little things.

Kwee was pleasantly surprised to see how far some students had come in turning the tide from apathy at their schools to a significant portion of their population joining Net Zero campuses and other endeavors. All of these students and organization leaders are among the best people that Kwee will ever meet because they are fearlessly striving to do as much good as they can just because of the compassion they feel for people that they mostly will never meet.

However, Kwee would have liked a uniform template for creating change and more actionable plans.

Kiara Reyes, a junior at Will Rice College, attended many food recovery sessions. At one session, they presented Post Landfill Action Network, PLAN, which Rice is now a part of. This is a way for students to get resources for their environmental projects. Reyes is currently working with serveries to bring composting to Rice, and PLAN has been very helpful with it. There was also a small case study on a small university that used all of their food from dining halls that was not served for food kitchens. They were taught the regulations for how to go about this.

Reyes was surprised at one talk where they said sustainability was related to sexual misconduct in some places. People would take advantage of the funds for their own agenda. She was also surprised at a session that said that you should not use GMO’s, which bothered Reyes as her interest lies in synthetic biology and knows that GMO’s are not actually that bad if you do more scientific research.

Reyes found seeing so many successful students achieving such big projects very empowering and it gave her motivation. She found the conference to be pretty complete.

Grace Wickerson is a sophomore from Brown College. Wickerson attended four sessions — Social Justice and Sustainability, A Case Study on Campus Sustainability, Advancing the Green Building Movement through Community Action and Learning, Orientation Week Sustainability Ambassadors Program, and Strategy for Climate Change Action. One of Wickerson’s major takeaways from these sessions was how important it was to get people talking early about sustainability. This could be done through promoting a culture of sustainability during O-Week.

With so many students from other schools attending the conference, Wickerson was able to connect with a student from UT Austin and is working on forming a network on environmental leaders around Texas. Wickerson loved meeting other people doing similar work at other campuses because they provided much that they could learn from and adopt here at Rice.

Each student came back with person projects and missions. Wickerson is personally investigating Rice curriculum related to sustainability, not limiting to merely environmental sustainability, and seeing whether there are areas of need there.

Wickerson really appreciated how the conference practiced the sustainability that it labeled itself with, as the food was strictly vegetarian and cups were reusable. In the future, Wickerson would love to see more Rice students attend.

Kathy Yu is also a sophomore at Brown College. She was particularly excited to attend the sessions as they were targeted specifically to students trying to make a change on their campuses. One of her favorite sessions was from Bee Campus USA. They discussed making campuses more pollinator friendly, and Yu is working on a pursuing a certification with them, which would put her on the early train for college campuses pursuing this. Another session introduce Yu to a concept known as “network” which is a decentralized self-sufficient model of people who share resources. As a result, the SA Environmental Committee is now a part of the Power Shift Network on fighting against climate change in the US.

Something that surprised Yu from talking to other students was that a lot of other colleges have a green fund tacked onto tuition to fund green efforts on campus by students. There were past efforts to have this at Rice, and such a fund existed for a few years, but it fell a few votes short of being renewed. Yu intends to explore how to revive a student green fee for Rice.

This conference inspired Yu to look at leaders from other campuses that had ambitious and concrete plans. She was able to build a larger network and felt that she was part of a larger community, exchanging emails with other students. Yu would love the opportunity to go again next year.